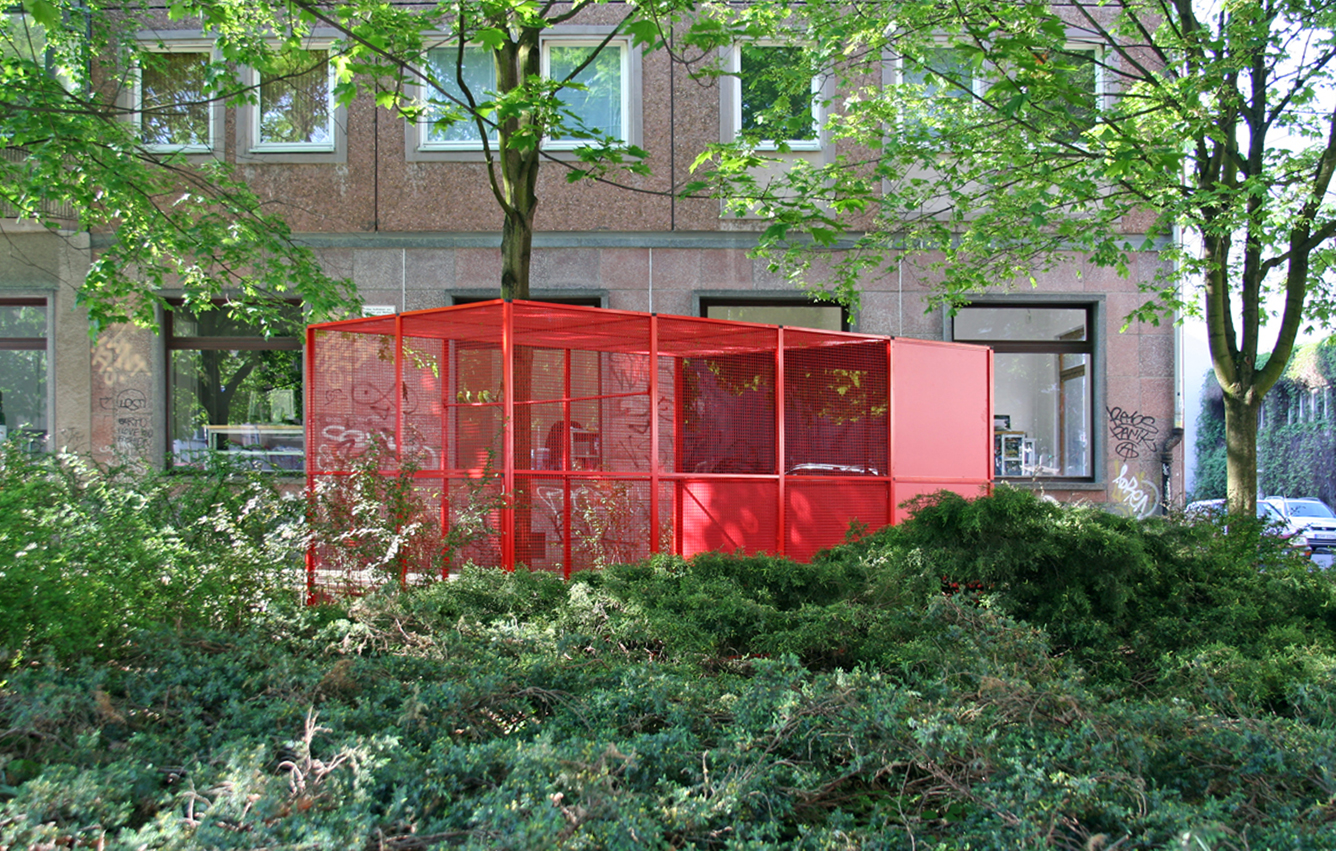 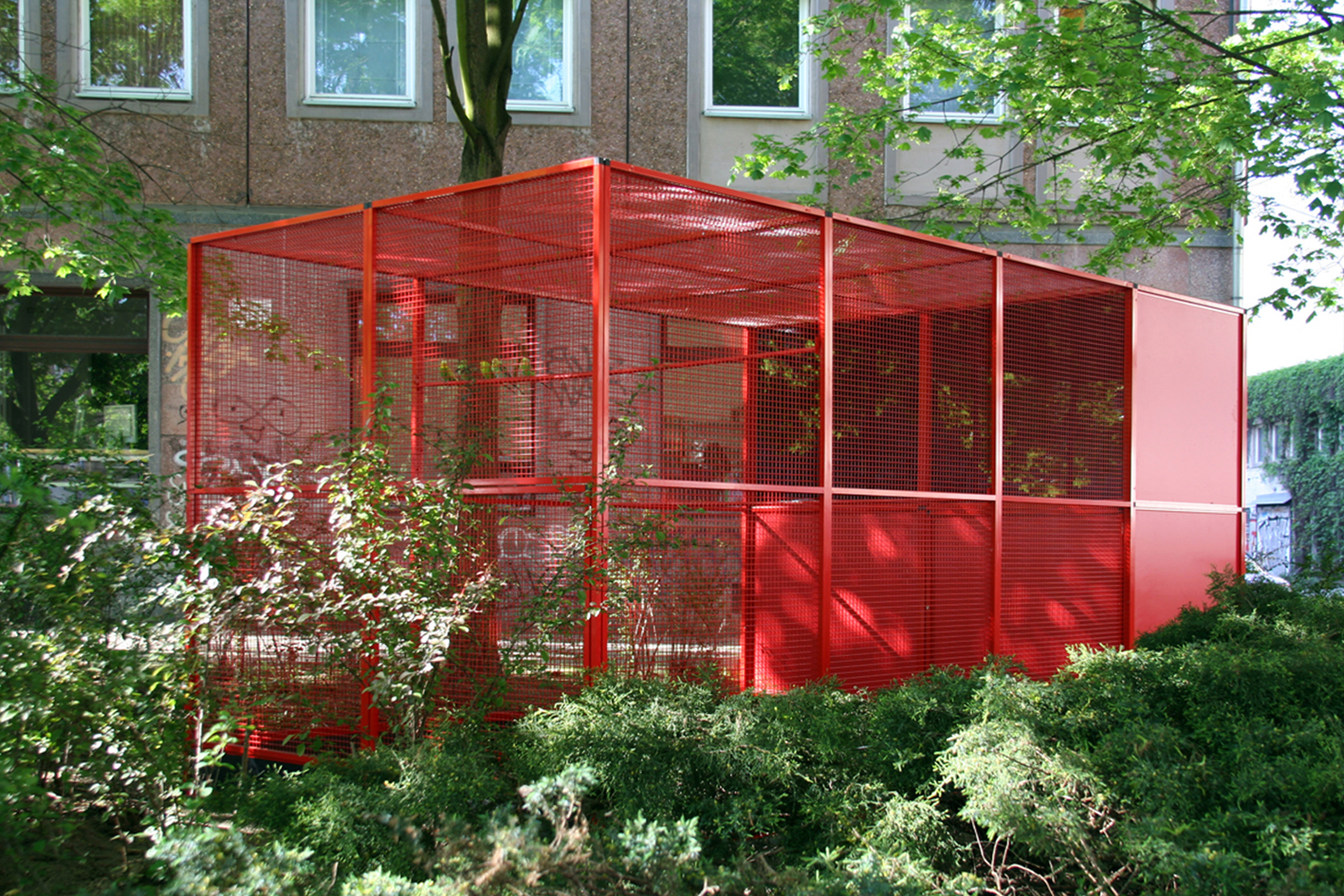 Trial by essay (on safety)

[...] the nightingale was silent, but the indefatigable black-cap was still hopping from twig to twig uttering its clear call. There was a general feeling of expectation. I stood at the window and waited too, though I haven’t the slightest idea what I was waiting for. After ‘closing time’ at six I have nothing more to expect betwixt heaven and earth. Rosa Luxemburg, Letters to Sophie Liebknecht, Wronke, June 1, 1917

One might ask oneself in what unexpected ways the outline of a present time can suddenly loom up from a past one. It is the first Monday of August in Amsterdam, and it is noon: The recording needs to be stopped, and the window has to be closed before the telephone interview can continue. While concentratedly elaborating on his work from some foreign city somewhere, Lucas Lenglet is being cut off mid-sentence by the howling of an army of sirens swelling up from an invisible landscape of warning posts, and for one minute and twenty-six seconds attention is diverted. A message is being broadcasted to a community – not alerting it to impending danger, but reassuring it that its warning system is still functioning, should danger ever occur. To those having grown up in the Netherlands in the sixties and seventies of the past century, it is a sound familiar from childhood days in Cold War-times. Known to only few is the silent, albeit salient history that this sound, or rather the national defense system it belonged to, harbours – that of a government attempting to offer its people security from an invisible threat.

When at the end of the fifties the Dutch Ministry of Internal Affairs was faced with the fact that the Civil Defense Organisation ‘Bescherming Bevolking’*, or in short ‘B.B.’, modelled after its British example of recruited civil volunteers, and implemented with the tactics of World War II in mind, was inadequate to protect against the imminent threat of a nuclear attack, it secretly opted for a placebo, costing one-tenth of the estimated budget for upgrading the organisation. A new division, under the name of A.B.C. (Atomic, Biological, Chemical) was added for which declined conscripts were summoned, and a national campaign informing the people was started in 1961. While shelters were being built, citizens got educated in cinemas and via door-to-door distributed envelopes: semi-scientificly explained what different possible attacks might effect – the severest one being a dropped A-bomb, the known consequence of which, if not total destruction, was an invisible fall-out, whose consequences in turn were unknown – individuals were instructed on how they could prepare by laying in listed supplies, purchasing battery-operated radios and painting their windows white. In the one minute interval between the B.B. sounding the sirens and actual impact, they were advised to save themselves by closing windows, hiding under tables or in cellars, and in case of being outdoors, by crouching under cars or trees.

Through its strategy of simultaneously instilling fear by grotesquely sketching threat and attempting to pacify with clumsy regulations, the B.B. became the butt of jokes among skeptics. Notwithstanding this, in a country where fear of a ‘total war’ was manifest, and paranoia reigned supreme, the B.B. was maintained until well into the eighties. It wasn’t until the very end of the century that the Dutch Government Information Service allowed for an investigation after the history of the organisation. Admitting to the fact that the B.B. had been but a dummy, it justified its existence through psychological reasoning: it had been there to constitute a feeling of collectivity, form a buffer against mass-defeatism, and – not least – to give off a signal to enemies.

The threat of a nuclear war long subsided, the monthly excersize of the national alarm was restored by the Dutch government in 2003 after several years of silence. The sound of it was at risk of slipping into a collective unconsciousness, and disappear from an effective collective recognition in case of local calamities.

[...] But then you’d go there and you’d see some familiar faces. You’d learn about nuclear weapons, which was rather insightful. So we continued to go, there were three of us, and we happened to have been in school together, we were comrades from school years and got along really well. [...] So we would be sitting together in that basement, and gradually it got really enjoyable. Mr. Verbeek, summoned trainee for the A.B.C.-division, 1962, Andere Tijden, 2000.

One could wonder to what extent a sense of protection relates to a knowledge of danger. From the bench on the open square flanking the Volksbühne Lenglet’s bright red aviary, fitted between the shrubs, and shaded by trees in the green area across the Rosa-Luxemburg-Strasse, is hardly visible. It is around seven in the evening and dusk is near falling: Filtered from the din of the traffic rushing by, the sound of the bright green budgerigars is clearly audible. When focused upon, their alien singing discloses a panorama of indigenous sounds that are typically overpassed. Messages are being broadcasted among communities – sparrows are chirping in the flowerbeds behind the bench, tits chickadee from the older tree at the far end of the square, and the song of a blackbird is being carried from the adjoining green area to that of another, maybe lurking on a rooftop nearby. On the pebbles carpeting the square, between newly planted trees, so young that their stems are thinner than the posts of the intricate constructions that are meant to keep them up, three magpies are chattering. As close to the perceptual surface as the birds’ presence is, as far is that of the past of their stamping ground – a tale of invisible surroundings and collectives of diverging social groups.

Histories ooze from every corner of every street in the city of Berlin, but a materialization of the strata of this particular one  is not without effort. Time and again the territory around the bench has been wiped clear, while different protagonists performed on this stage, rearranged its décor, and played out their acts. Up until a date one hundred years ago, when city redevelopment plans caused the alleys of the still called Scheunenviertel to be cut through, in order to make way for the square now called Rosa-Luxemburg-Platz, the bench would have been located in the middle of a street then called Füsilierstrasse. From that point on, would it have been there, it would have afforded an unobstructed view of a past century’s facsimile of ideals and beliefs being shared or combatted between allies and against enemies of a multitude of backgrounds.

The quintuple renaming of the square runs in parallel to incisive moments in its history and indexes the collectives that were shaped by the field of action. From the time the square was christened Babelsberger Platz, until well into the years it bore the name Bülow Platz after 1910, it was not so much through geographical demarcation, as it was through a framing propaganda that bourgeois immigrant Jews, Christian trades- and craftsmen, deprived laborers, brothel-prostitutes and pushing thugs were considered to share a district. Holding all ingredients for a vivid area, the social hotspot turned into a political one, when in 1926 the Communist Party took residency in adjacent property and ongoing fights started between left and right wing Social Democrats, broken up by Weimarer police forces. It marked the beginning of its most violent period: the assembly of the different groups flocking the square epitomized the target of the rising NSDAP-Party, and with increasing frequency SA-troops started marching the square. In 1933 the Communist’s home was forcefully taken over and the name of the square was changed to Horst-Wessel-Platz. Twelve years of Nazi-regime, and a World War’s bombarding left the square desolated and destroyed. When it was turned over to the Soviet Military Administration in 1945, and rechristened Liebknecht-Platz, it has from then on harboured the citizens of the GDR, to have its name changed to Luxemburg Platz, and eventually Rosa-Luxemburg-Platz, until the Socialist society collapsed in 1989.

No traces of the subsequent groups that were framed in this territory can now be recognized from the bench on the square. But the history of collisions and coexistences imposed upon them in times when danger was visible and confrontations physical is embedded in a memory shared.

They couldn’t say that the Soviets had acoustic means of picking up American submarines, because they couldn’t find it. So they said, well maybe they have a non-acoustic means of making our submarine fleet vulnerable. But there was no evidence that they had a non-acoustic system. They’re saying, ‘we can’t find evidence that they’re doing it the way that everyone thinks they’re doing it, so they must be doing it a different way. We don’t know what that different way is, but they must be doing it.’ [...] Anne Cahn, Arms Control and Disarmament Agency, 1977-80, The Power of Nightmares, 2004

One might ponder upon the contradicting ways in which communities are formed. It has been reported from Berlin that one day a blue budgerigar flew around the aviary; it could not get in. Drawn by recognition of a familiar language, it probably will have sat on the fencing for some time, communicating with the green ones inside, whilst both parties will have tried to establish whether they were dealing with rivals, or perhaps potential mates. On conclusion that no social interaction could be effected, it must have flown off: Whereas a cage might effectively frame a flock, it does not necessarily reflect a community. It might safeguard its inhabitants from an immanent threat, but it also renders purposeless the messages that they broadcast – either establishing collectivity among themselves, or establishing themselves as a community towards others. Uncaged, should the birds’ territory have been in danger of being invaded, they would have weighed the costs for defending it against the benefits of inhabiting it. In case an actual predator would have been spotted, they would have sent out an alarm call to be picked up by flockmates in order to elicit mobbing behaviour, converging on and scaring off the party that was preying on them. Would they have been caught by surprise by a threat bigger than they could battle, they would have sounded an alarm, then directed at the enemy. Caged, they will not, because they cannot – and hopefully need not. It makes one think on how safety is established – a brief consideration with respect to an invisible history.

With regards to the relation of a knowledge of danger and a sense of protection: If a feeling of communal safety could be rooted in a blind assumption one is being protected, then a precise knowledge of potential dangers from which one is shielded might arguably be obsolete. One might consider to what extent a threat that is unknown, invisible, or even inconceivable to one, can be substantiated in order to convey a similar awareness that one is being protected, or for that matter, will be able to protect oneself. Could a materialization convey a same sense of safety? And could this mechanism also be turned around – that the sheer substantiating of a threat, whether rooted in actual danger or not, could be deployed to justify measures for protection, and therefore generate a feeling of safety? Does a shared feeling of safety constitute a community?

For strategies to accomplish safety, one always turns to the past. History serves as a model for the present, and known and established methods tend to be repeated. The present does not disclose itself until confronted with the past, and thinking of the logic of how something from an unconscious past can actualize a hidden present, acutely frame a status quo, and possibly shed a utopic light, one might argue that the monthly testing of the Dutch national siren system should never have been resumed.

Lenglet asked if the receiver could be held out shortly, before the window was closed: the sound of the sirens reminded him of home.