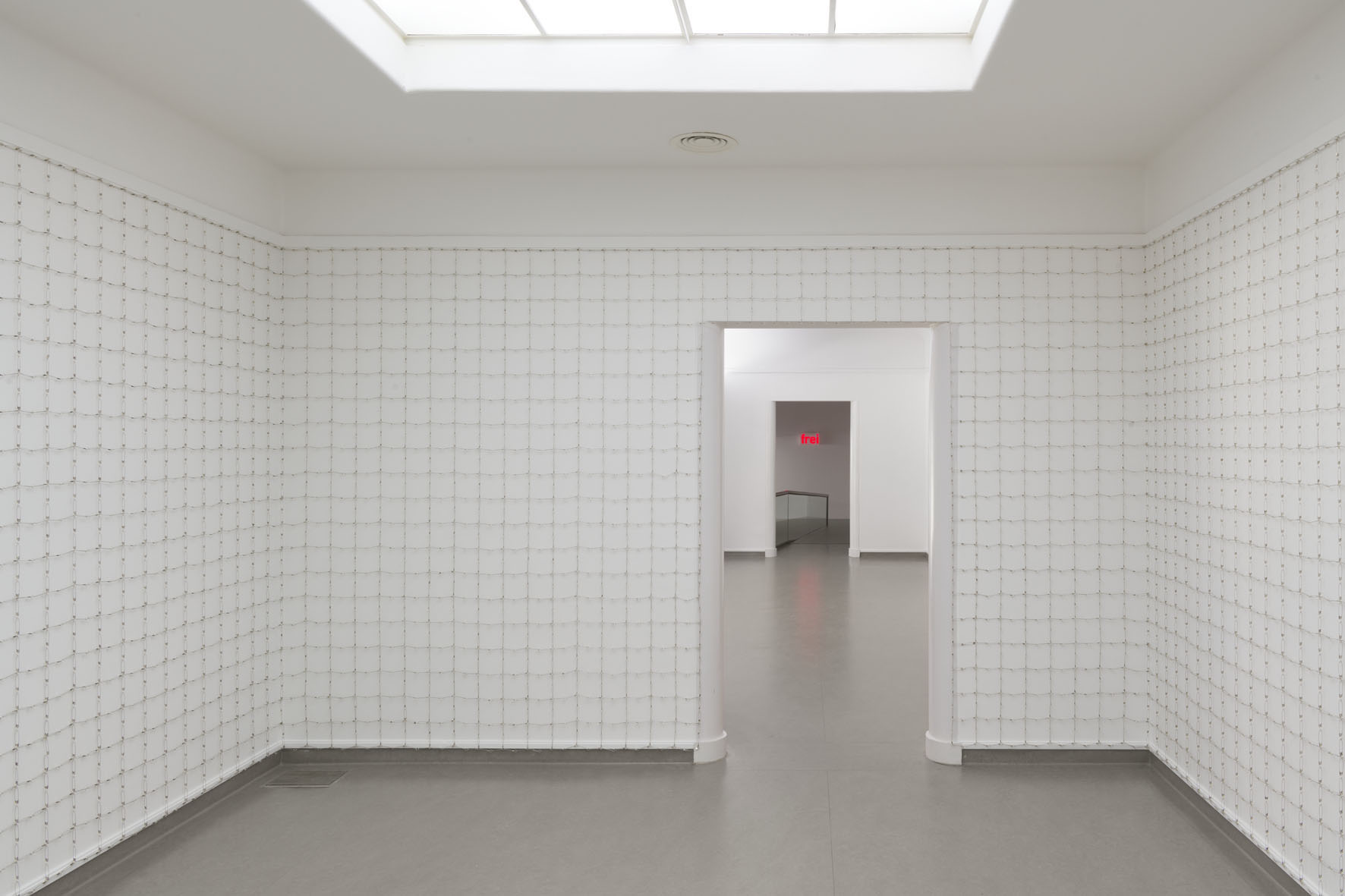 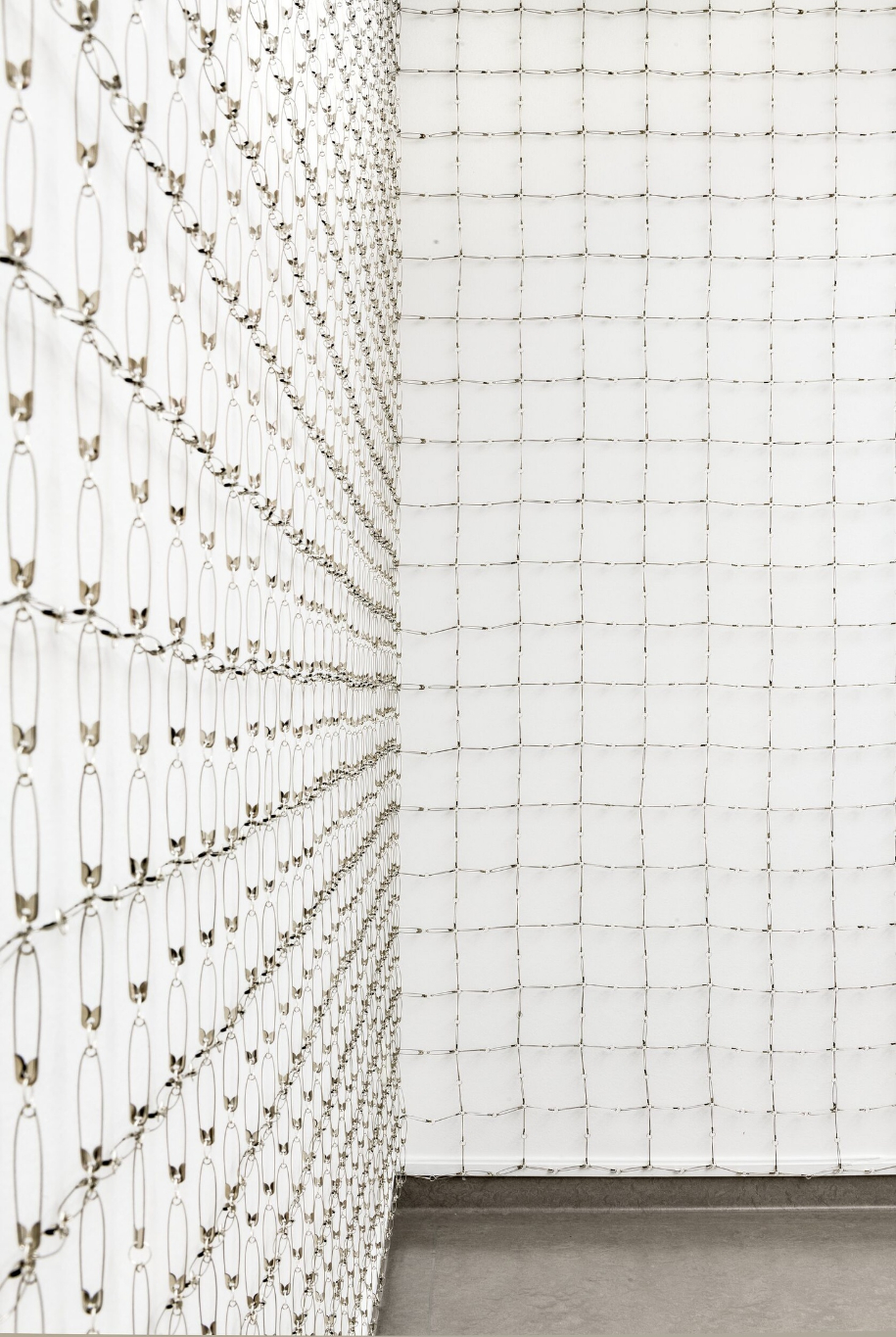 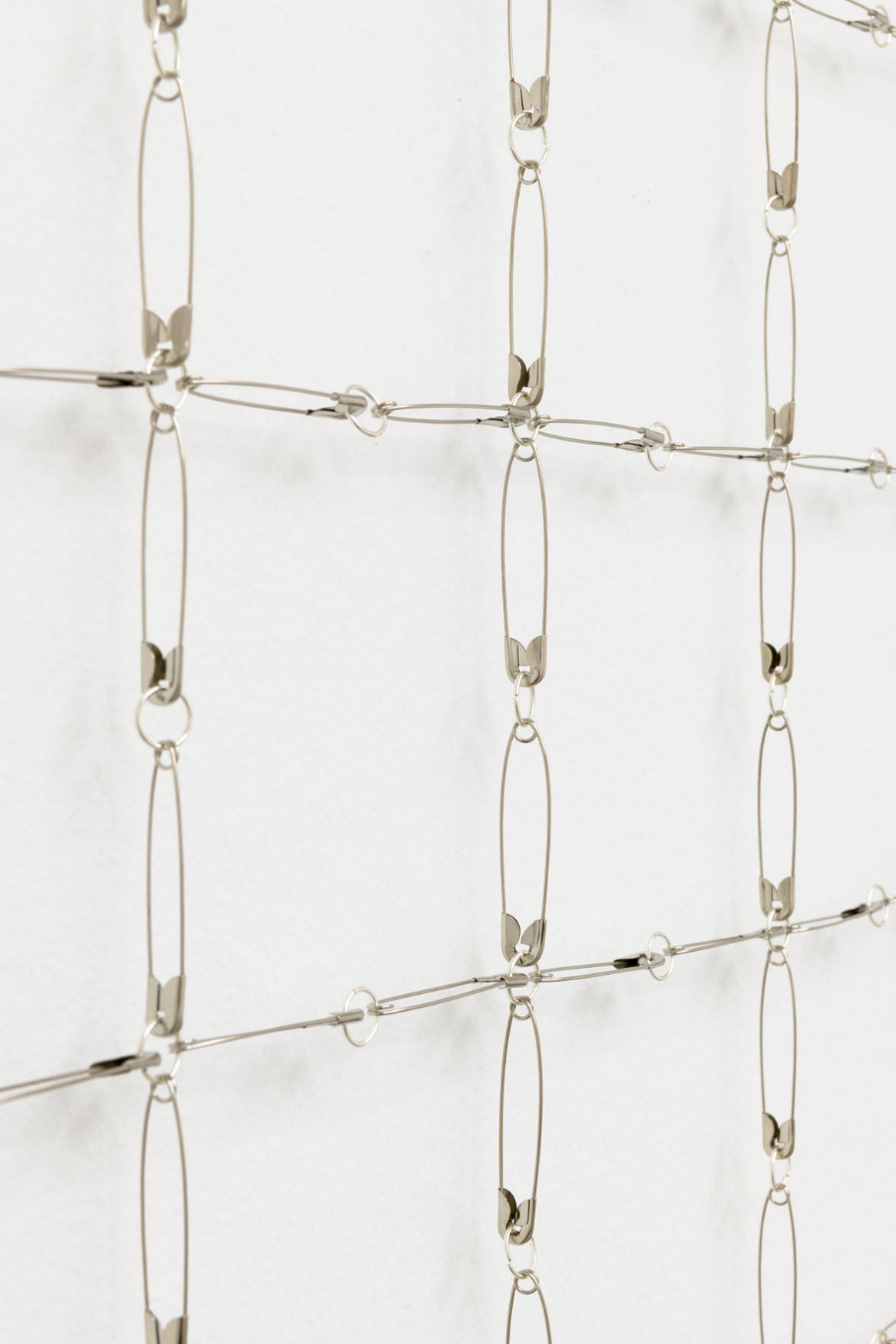 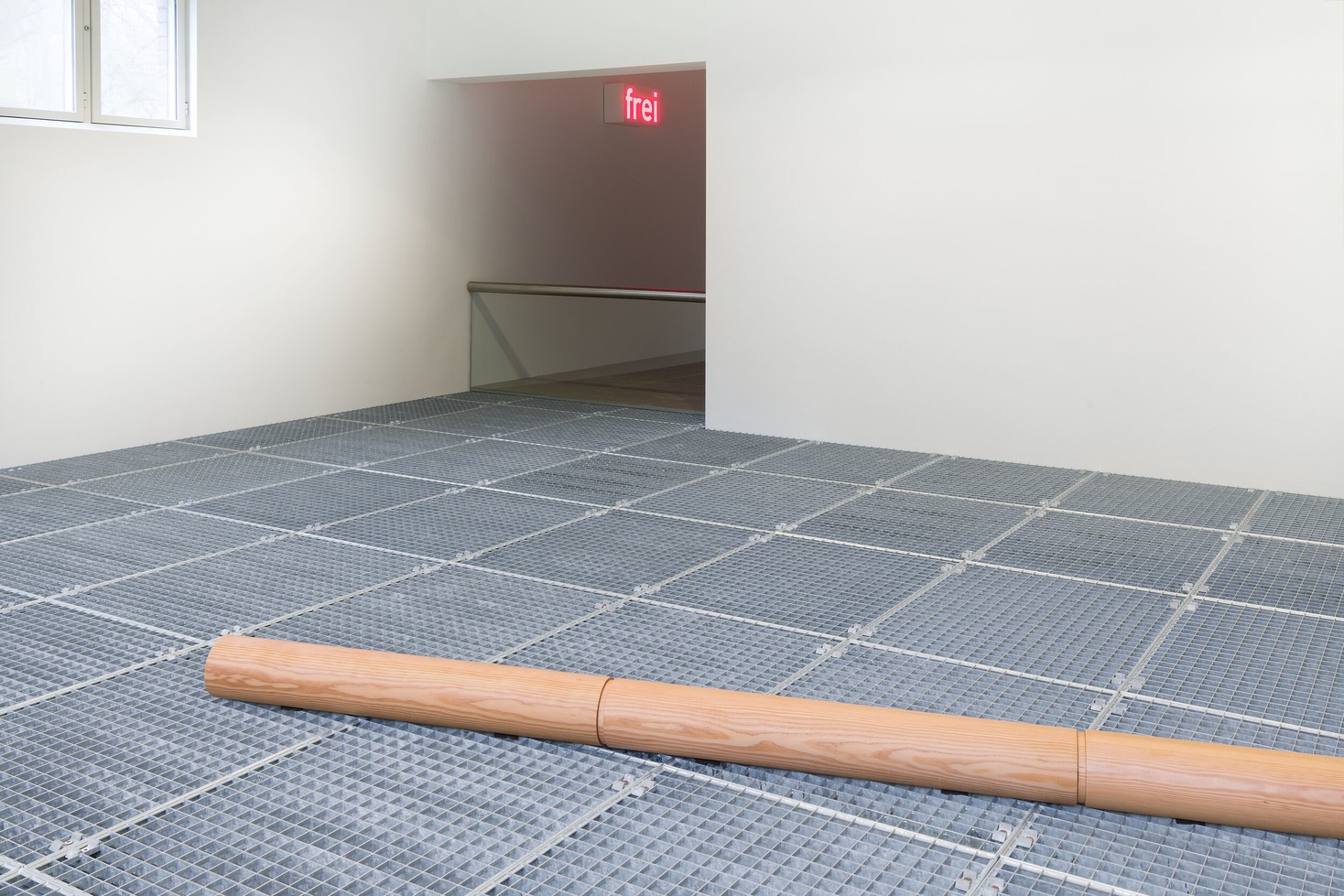 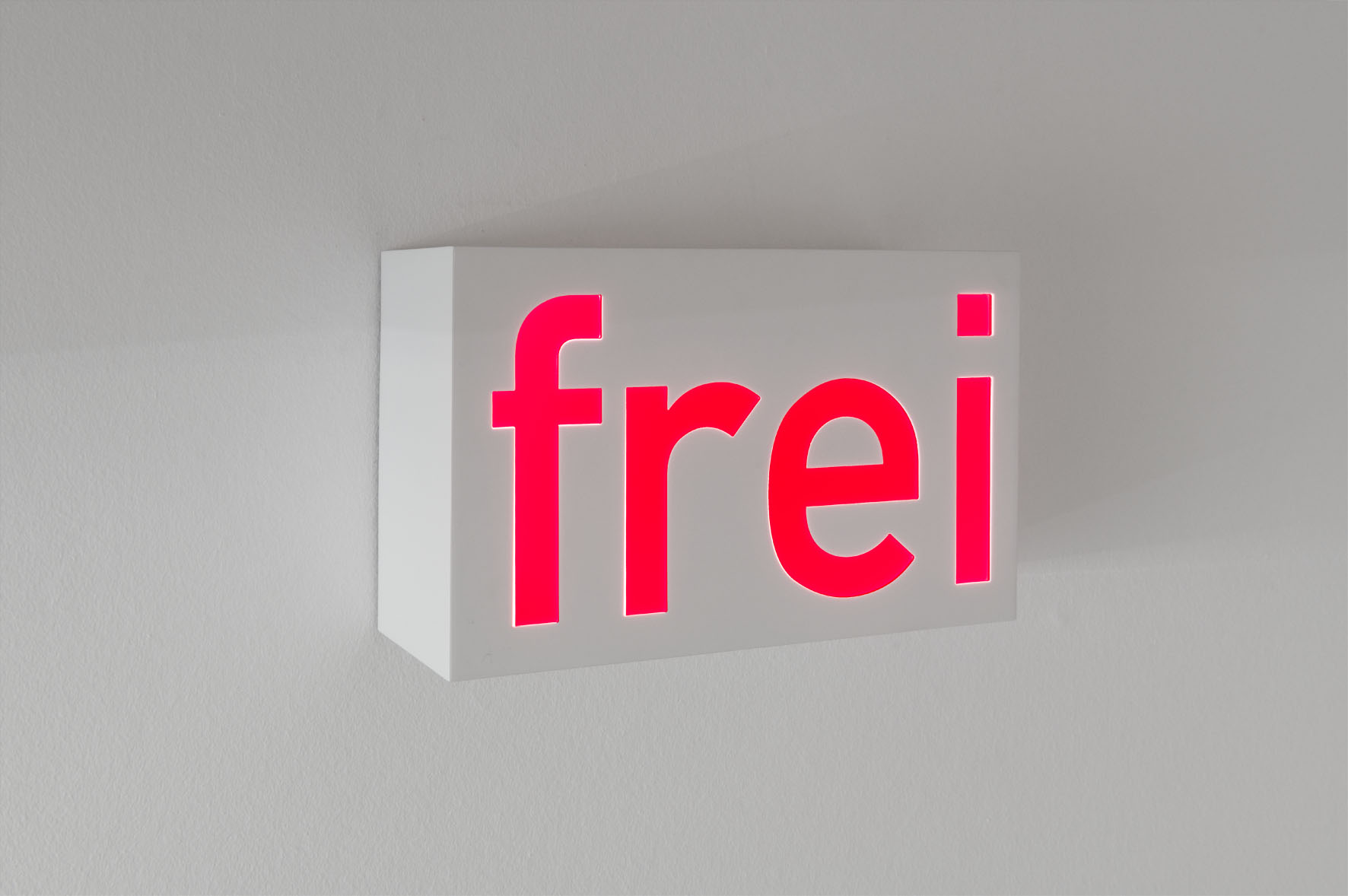 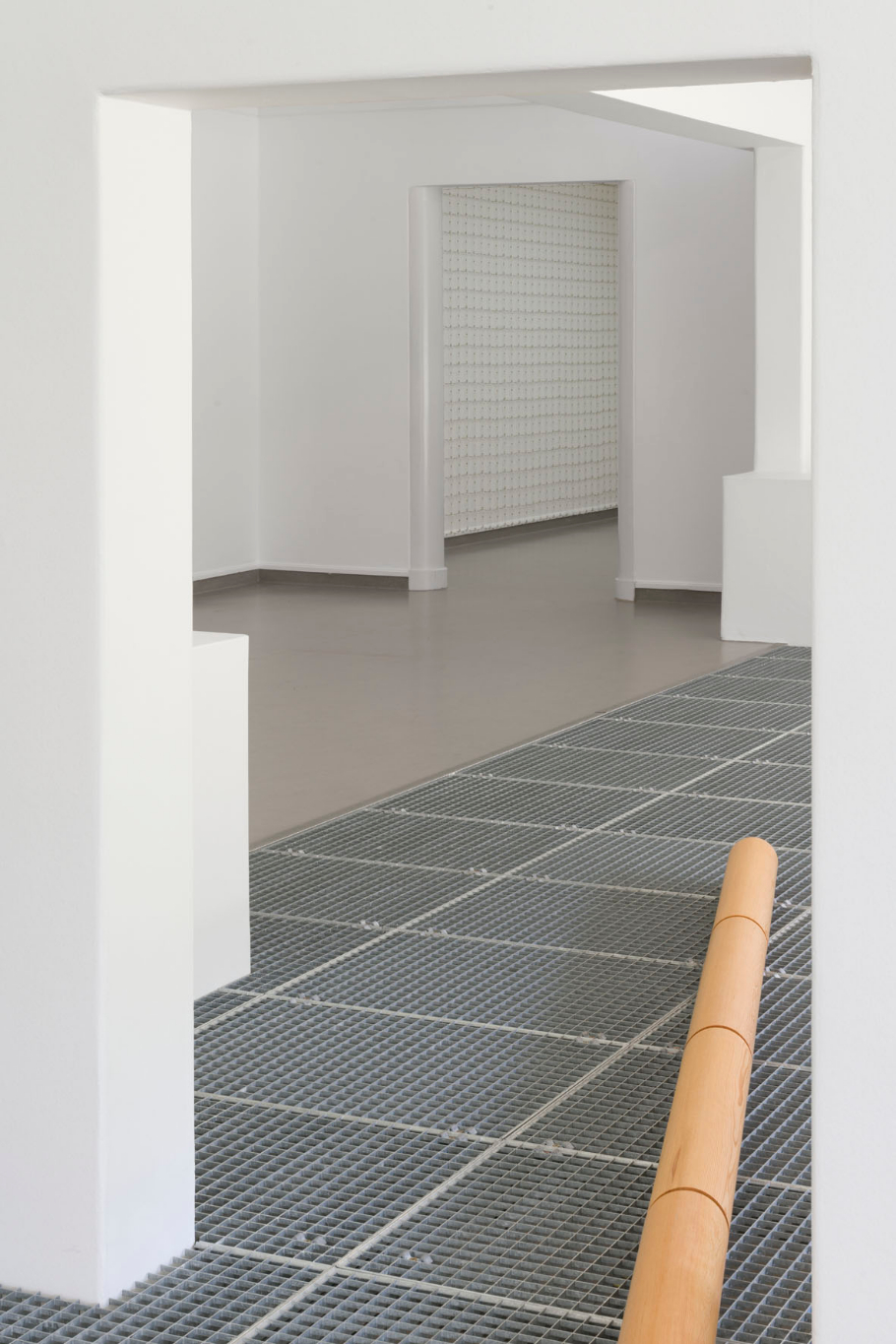 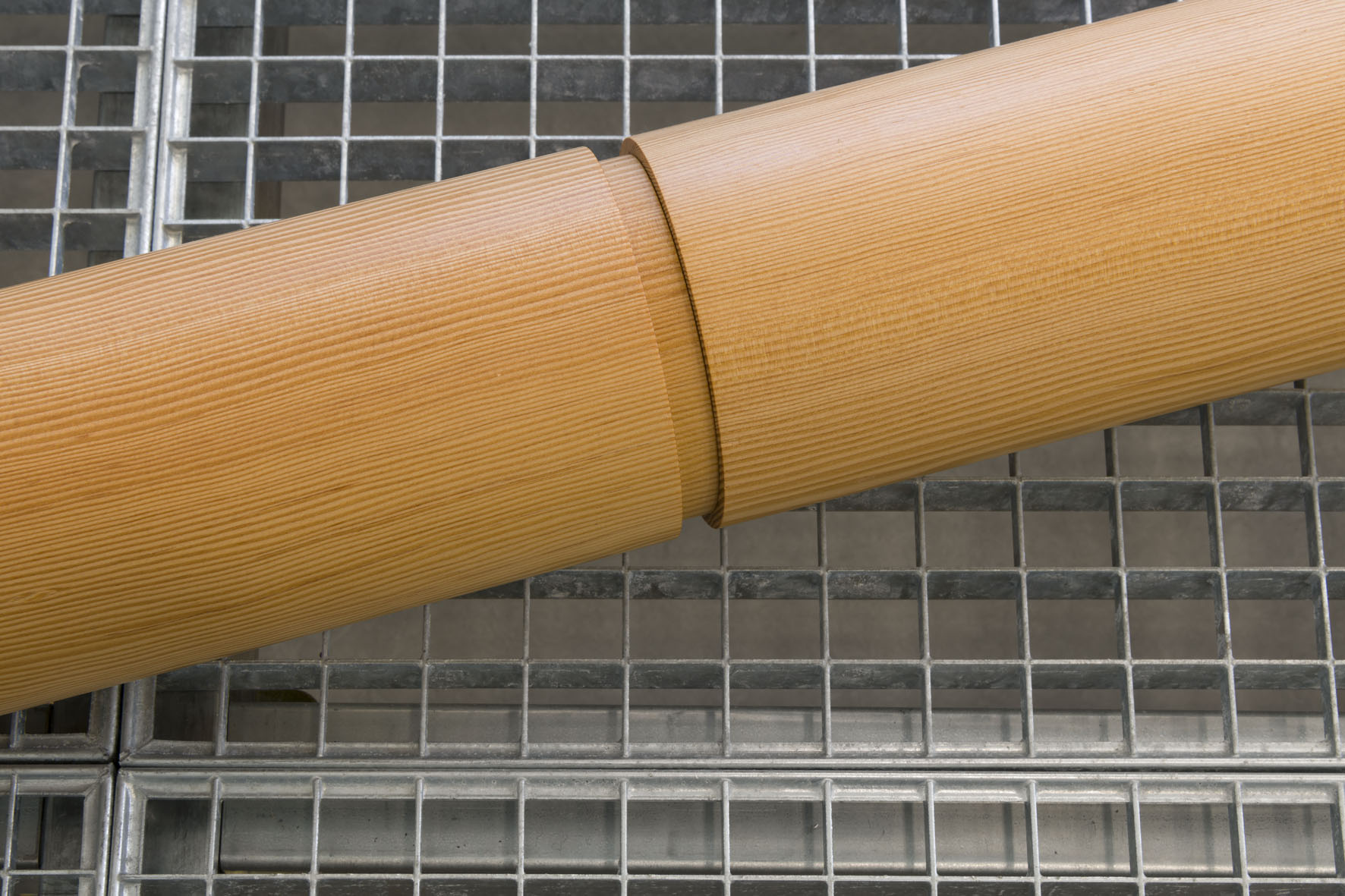 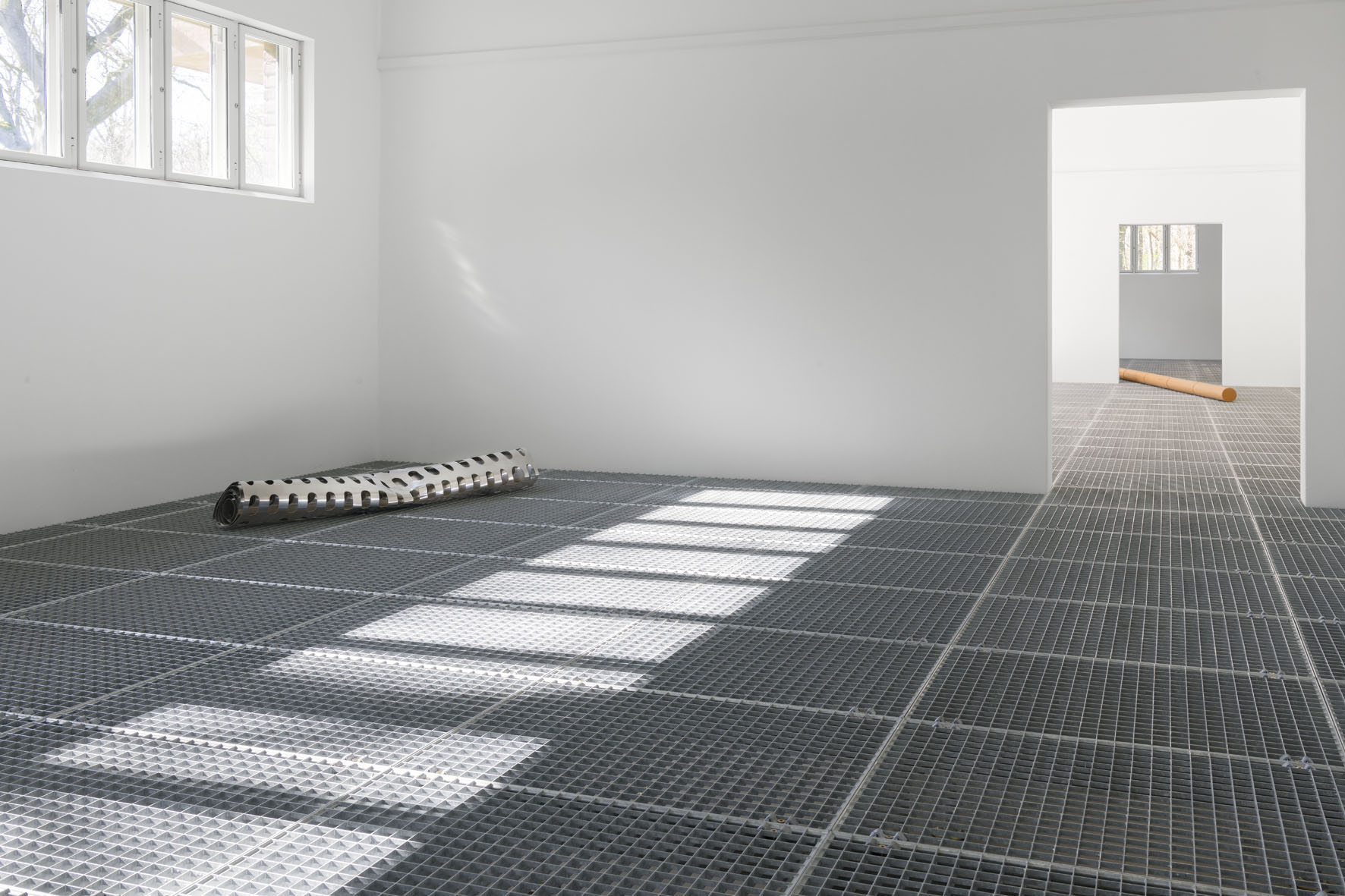 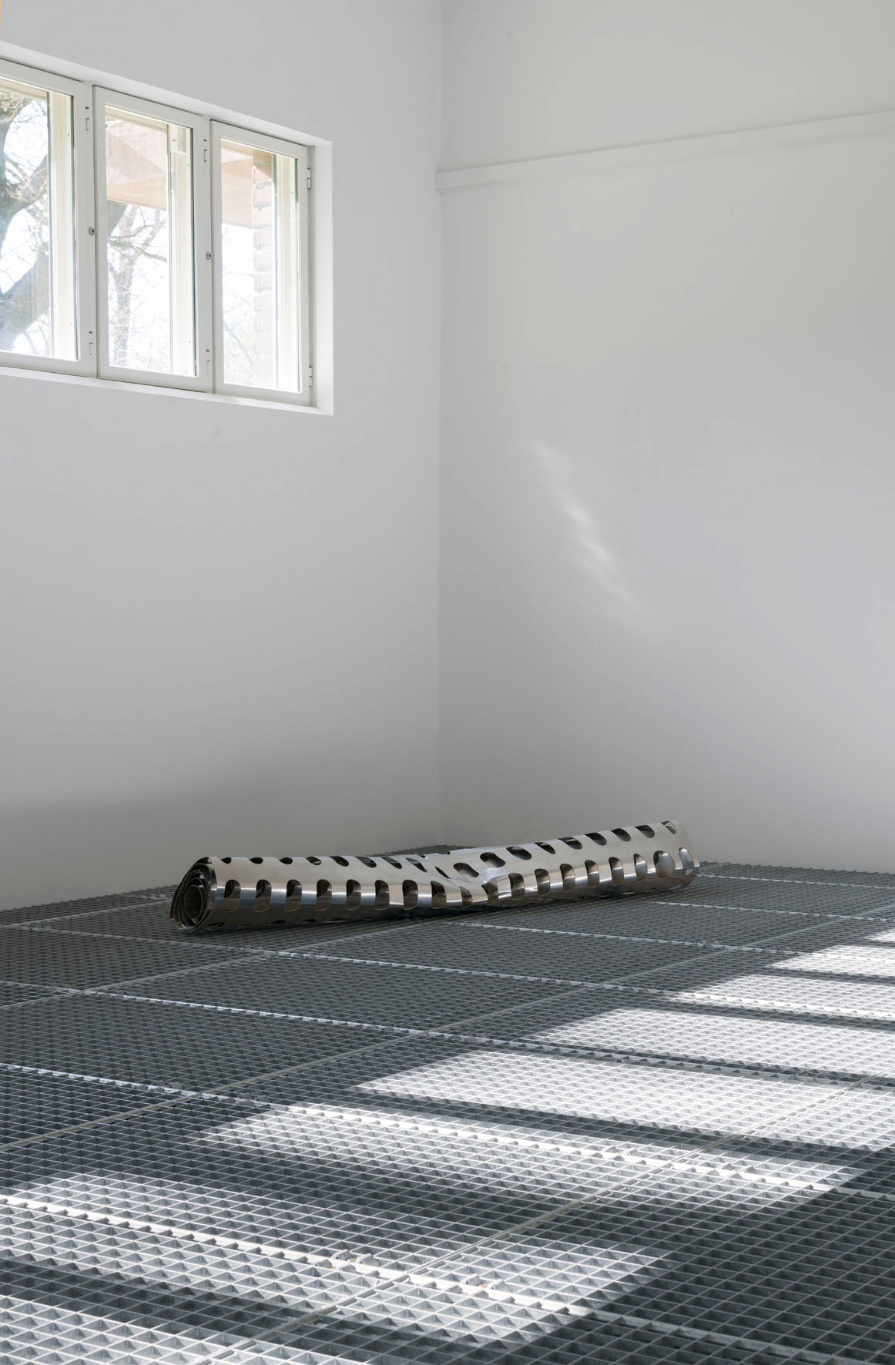 Text by Steven ten Thije for the publication Vestibulum 2

Some thirty inches from my nose

The frontier of my person goes,

Is private pagus or demesne.

Stranger, unless with bedroom eyes

I beckon you to fraternize,

I have no gun, but I can spit.

Interior – exterior. The image gradually transforms from light to dark and back again, for more than half an hour. The interior of a house and its exterior, the landscape visible through the window, appear and disappear alternately. The photographs were taken on a tripod with a different exposure each time, so the image shifts from the inside to the outside. All the interiors are rooms located in Marfa, Texas, in the United States. The work Land and buildings (2013-2019) is a kind of prelude to And all the untilled air between by Lucas Lenglet.

In 2013, Lenglet travelled to Marfa to understand why the American artist Donald Judd chose this particular spot as his workplace in the nineteen sixties. Judd described his work as ‘specific objects’. He wanted to separate them from existing categories, such as painting or sculpture. He attached boxes and simple, logical structures to the wall or placed them in the space. The work sparked an intense controversy with art critic Michael Fried, who accused Judd of making works without focus. According to Fried, viewing thus becomes a strange kind of theatre in which the observer is constantly aware that multiple perspectives are possible. The focus of attention is not the work itself, but the theatrical movement around the work. In Fried’s opinion, that deprives one of the opportunity to experience the work as an immediate whole, as a pure presence. Years later, the German art philosopher Juliane Rebentisch reflected on the controversy between Fried and Judd. She writes that this essentially revolves around a difference of opinion regarding how presence can be experienced. For Fried it is a closed experience, while Judd sees it as an open event. Fried wants to be absorbed into a moment of completeness, Judd invites the observer to surrender to endlessly discovering all the possibilities that present themselves during the movement around the work. The contrast between a tense stasis and an open movement.

In the vast emptiness of the Texas desert, Lenglet opts for movement, but not like that of Judd. His movement focuses not on an object, but on a boundary: the window. In houses, the window is the thing in between other things. It connects and also separates. Lenglet directs your attention to an ‘interim object’, the most common thing that functions both as architecture and image. Can an image emerge without a frame? Does an inside exist without an outside? Land and buildings seems to answer these questions negatively. Both – inside and outside – are consequences of each other, they meet at the boundary. The movement is only open when it also closes somewhere.

And all the untilled air between is presented in the former entrance in the Van de Velde wing of the Kröller-Müller Museum. On paper it seems well-ordered: five works of art in five spaces. But nowhere are the works ‘stand-alone’. Every artwork is a ‘situation’. Because the works subsequently interact with each other, new constellations arise. This effect is created particularly by the largest work And all the untilled air between – an elevation of the floor with galvanized walkways across three rooms. The spaces that made up the old entrance in the Van de Velde wing are slightly lower than in the rest of the building, but this intervention equalizes the floor level throughout the entire museum. The open structure of the grilles allows you to see and experience the almost half-metre void under your feet. And the intervention has another unusual effect: it lowers the entrance to two rooms by half a metre. You have to stoop to walk from one room to another. What used to be a neutral opening now becomes a low gateway on which you could hit your head. The ‘interim object’ – the opening – is made visibly and physically palpable, which draws attention to the movement through the space and how this is directed by the architecture.

There are two other works on the floor: untitled (barrier) and you and you and you and you. untitled (barrier). A wooden pole made of nine equal parts lies diagonally in the space on the raised floor and through the lowered opening. Walking through the opening thus becomes an even more perilous undertaking: you can now both trip and bump your head. The artworks do not really invite you to view them from a distance. Rather, they are a rhythm that you move around or along, the theatrical movement that Fried found problematic in Judd’s work. Lenglet, however, seems to find the elegant walk around or along the work, as promoted by Judd, too easy. Here, the movement is not a smooth line, but a journey with obstacles – barriers, as the subtitle describes it.

The two other works are located in two rooms, the entrances of which are facing each other. From one room you can see into the other and vice versa. One is light, the other dark. In the light room hangs Beware of rudely crossing it:, a net of safety pins stretched over the entire wall in a tight grid. Here, Lenglet plays with similar themes in a different way. In this case, the barrier is simply the wall. No signs of violence in the room, but there are the endless sharp points of the pins. The ‘safety’ of the pins is given a different significance in this grid. The pins that normally hold fabrics in place to then be stitched together with a needle and thread, now hold each other in place and together form a fabric that again emphasizes a boundary – the wall.

The title, Beware of rudely crossing it:, is derived from the poem Prologue: The Birth of Architecture by H.W. Auden. The ‘it’ refers to the invisible boundary, the natural distance that people keep from each other in their daily interactions. If someone stands too close uninvited and without reason, it feels as though someone is invading your ‘personal’ space. Auden comically warns the invader: I have no gun, but I can spit. It is a sentiment that reappears throughout the exhibition and is a recurring theme in Lenglet’s work. Every work of art seems to have its own space that you have to enter (or violate). The objects do not stand side by side harmoniously, but are deliberately placed in each other’s way. The open, elegant movement around the work, characteristic of Judd, has become a tense moment of negotiation.

And all the untilled air between – the title of the exhibition and of the raised floor piece – also comes from the same poem. It refers to another aspect in the negotiation. The air or space around a person or object is ‘untilled’, untouched or ‘uncultivated’. Normally we experience air or space as emptiness, a neutral ‘place’ where something may occur. The poem shows us that in the vicinity of a subject, this emptiness becomes space and potential. Auden’s space has not yet been cultivated, but it has that potential. Lenglet’s artworks have their own ‘untilled’ air that they control. They have a guiding effect on their surroundings and at the same time show you that the architecture, which we experience subconsciously every day, also subtly cultivates space.

The dark room contains the last work, untitled (frei). The word ‘frei’ is written in red letters on the wall opposite the entrance. The room normally contains a ramp that provides access to the lower areas for wheelchairs. But with the raised floor, the need for this ramp has disappeared. All that remains is the handrail, which now aimlessly follows a course and slowly sinks into the floor. It is tempting to interpret the freedom of ‘frei’ as the contrast with the guiding effect of the now redundant ramp. Or perhaps as a confirmation, as the freedom of movement that is possible in the exhibition now that everything is at the same level. But both options feel unsatisfactory. If the artworks actually refer to something, then it is more about a lack of freedom, about the coercive forces of architecture and the artworks that do not allow you to walk freely, but that constantly guide you, both consciously and unconsciously.

Furthermore, ‘frei’ introduces a second dimension to the work: in addition to space, also time. Language captures and reminds. It describes so that it can be regained later, or it can refer to what there is not now. untitled (frei) also raises another question: why is it ‘frei’ and not ‘vrij’ (Dutch) or ‘free’? The German makes the language specific. It is neither Lenglet’s (native) tongue, nor the language of the country hosting the exhibition, nor is it today’s ubiquitous English. It is consistent with Lenglet’s game. In the same way that the space around the works is not just empty space, but ‘uncultivated’, the language is not just language, but a language that refers to a region and a history. In Lenglet’s work, nothing is universal or general, everything is specific.

The specificity that Judd placed in the object lies in the confrontation with a boundary for Lenglet. It is about an encounter between a specific body and a specific object, in a specific architecture. The experience of a boundary makes precisely that visible. Therein lies the subtle ethics of Lenglet’s work. Because the confrontation with the obstacle may not always be easy, but it does require you to determine your position. Lenglet’s work thus offers an unusual perspective on freedom. It is not a space in which anything is possible, but an encounter that challenges you to experience your own specificity in relation to something else. Freedom is the option to choose relative to a boundary. The fact that this is not a voluntary choice, or you could bump your head hard, makes the work clear with seriousness and gentle irony. Lenglet seems to tell us that it is not those who lean backward that are free, but those who pay attention.